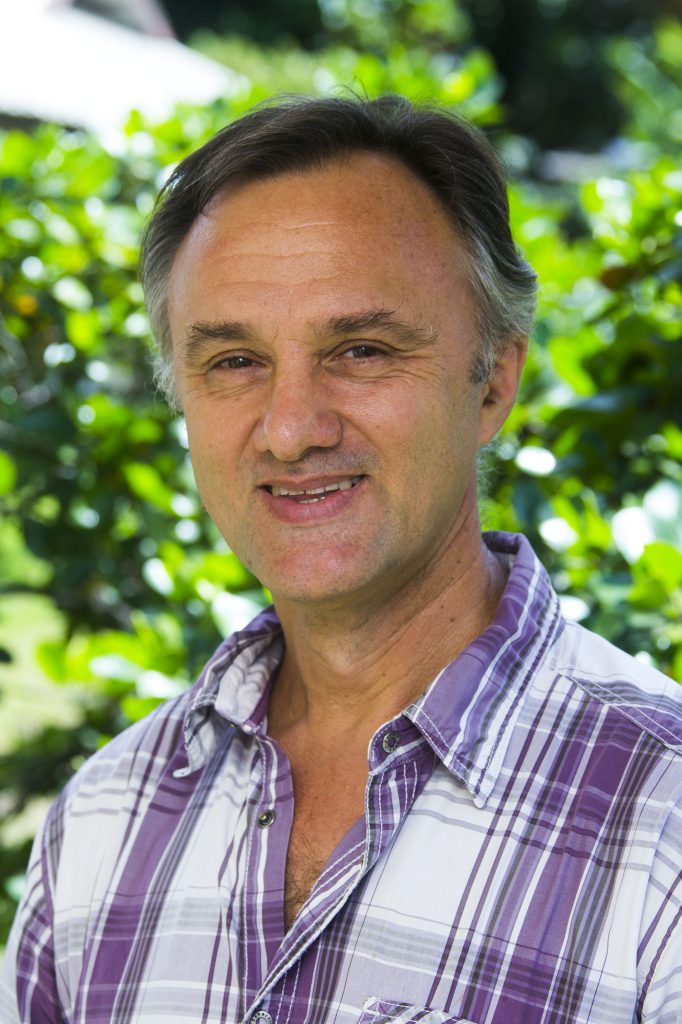 I was born in France in 1960 and started woodcarving when I was 12, just with a knife.
During my medical studies in France (I am a physiotherapist) I also studied art (academic drawing, oil painting, pottery, ceramic, bronze…) in Beaux Arts school from 1981 to 1984. I learned many techniques I still use today on my turnings and carvings.

A friend of mine, a professional woodworker, had a woodlathe in his workshop and I was very interested to try woodturning. I thought the lathe was just a machine like many other machines but I quickly got an addictive illness when we started to use it. I called it “Turnmania”. Mind is turning too, not only wood. Impossible to stop. When you start to use a lathe, you become a turner for life and there is no medicine to stop. 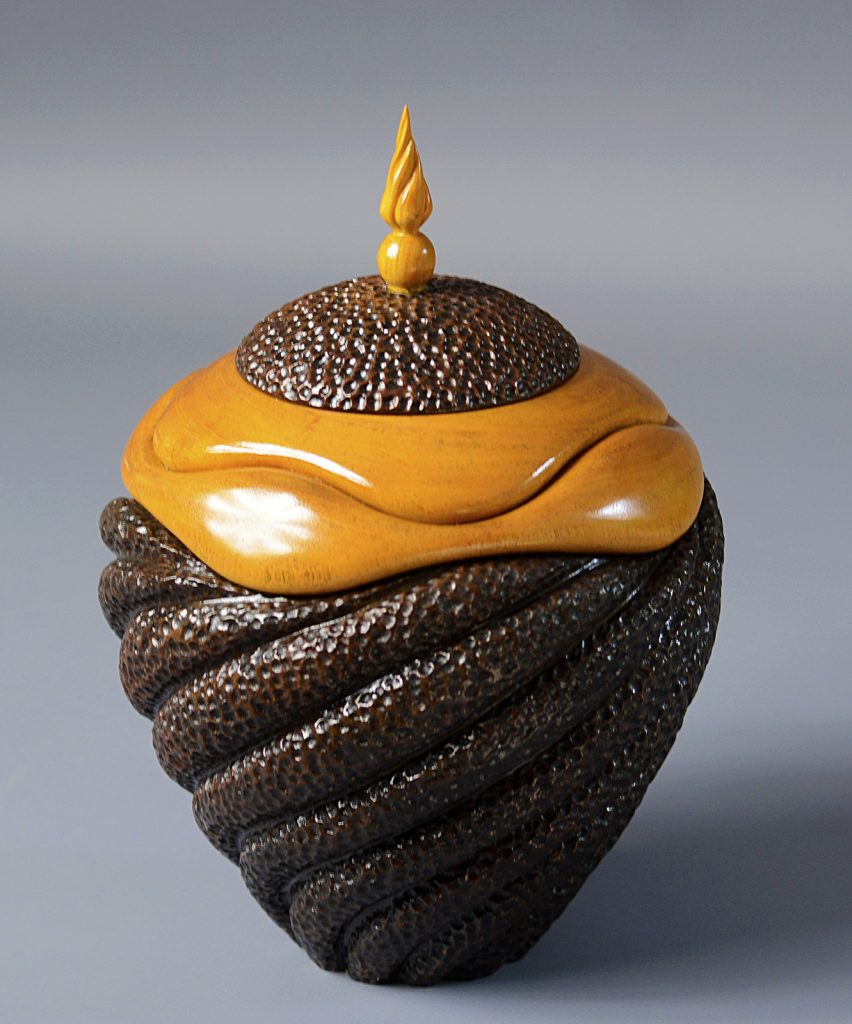 In 2001 I chose to live on the Marquesas Islands, French Polynesia, for a peaceful and natural life with my wife. We were tired about life in “civilized” countries. The Marquesas are small islands located between Tahiti and Hawaii. We live on Hiva Oa, the main island of the south Marquesas. It is another planet. People, time, weather, all is quiet and peaceful.

I work as a physiotherapist in the medical centre and spend my free time turning, painting and woodcarving. Woods are fabulous in the Marquesas, it’s unlimited. 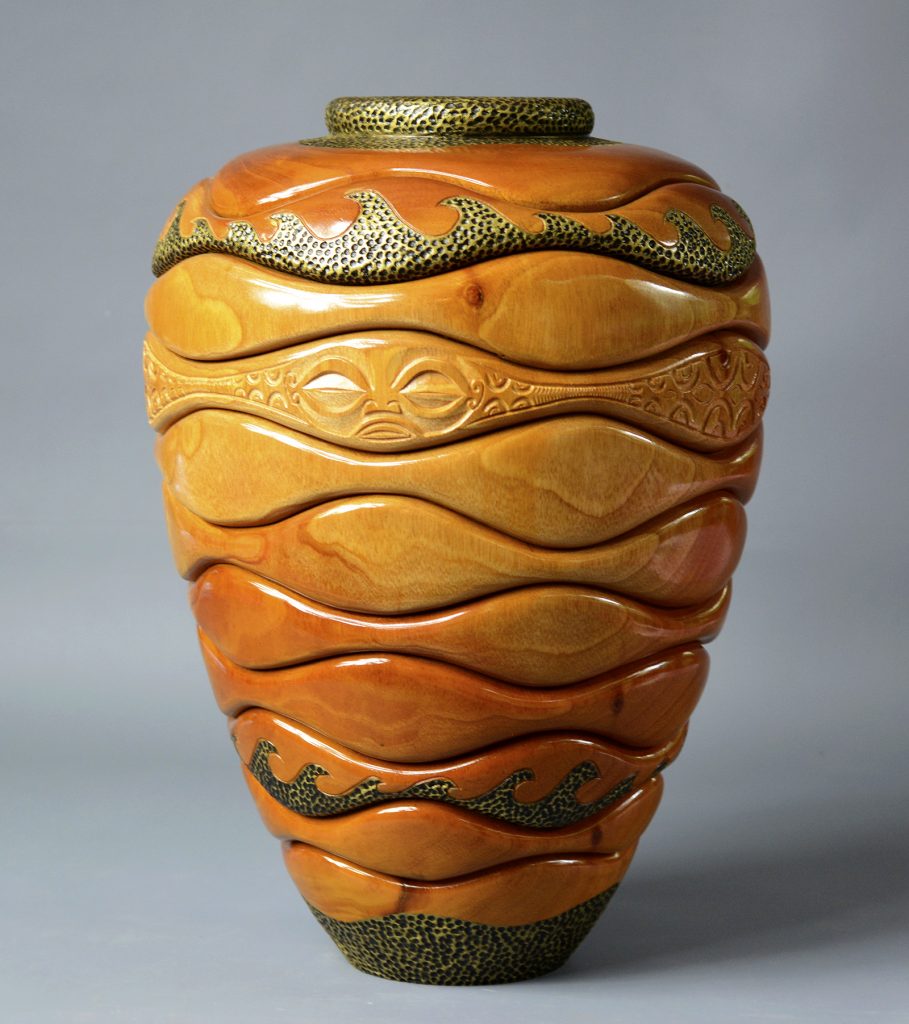 I always use trees that have fallen after a rainy or windy period. I also get wood from trees cut in gardens, around houses or at the side of the road but I never cut a live tree myself. I am lucky to have a lot of wood and I don’t need to kill a tree.

We spend a natural life, between beach and mountain, with kids, pets and horses and don’t need anything else. 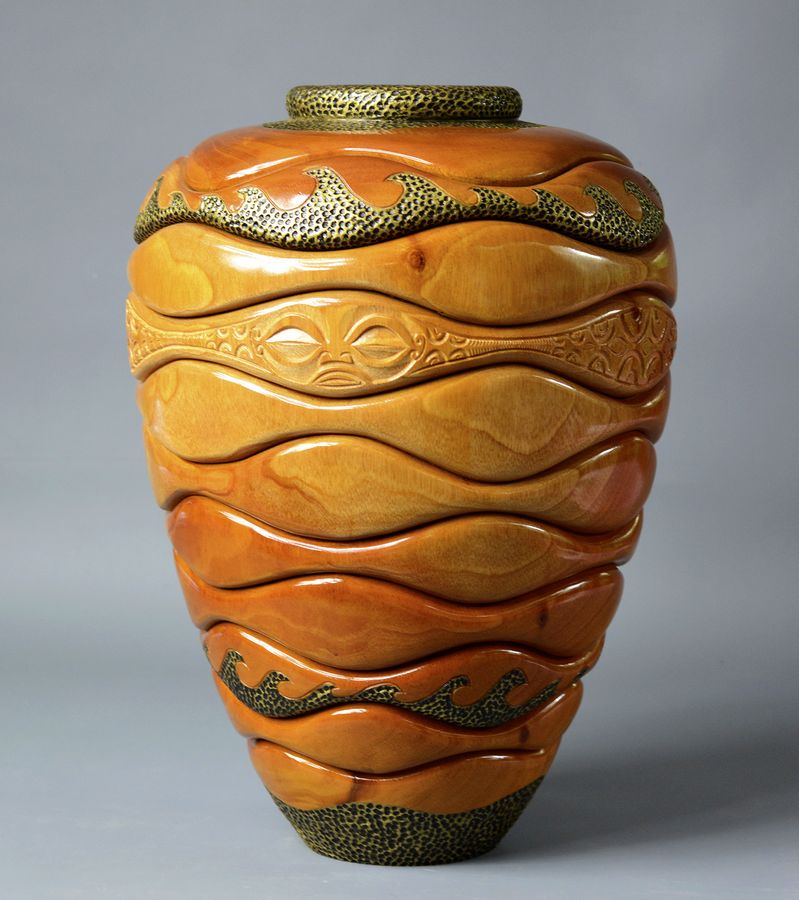 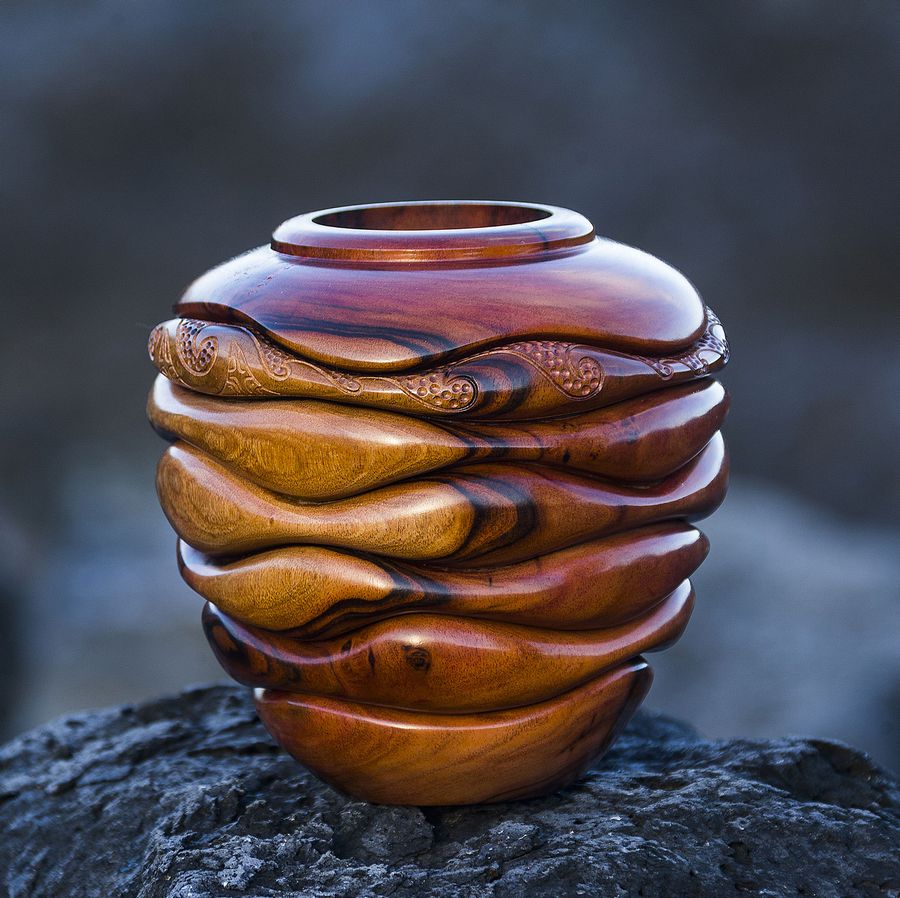 In my first demonstration I will show you my original method to do a wavy piece.
My first idea came in 2009 after seeing pottery made by a Japanese potter. The pottery was made with several rings piled up one on each other and melted during firing. I wanted to try this effect with a wood piece and thought about how to do it. I knew the bandsaw method to get waves but wanted to find something more versatile and less dangerous.
After some tries I found a method to easily cut a turning in several rings, shape and sand each ring apart before gluing them back to the piece. I will explain how to prepare the turning and will show how to cut and shape rings. I will show all the tools I use and how I use them.
Some difficulties may appear during the process and I will explain how to avoid or how to fix them.
Boxes, bowls, vases… any kind of turning can be easily turned into wavy pieces with this very simple method, yet affordable for confirmed beginner turners.
Spiral Vase 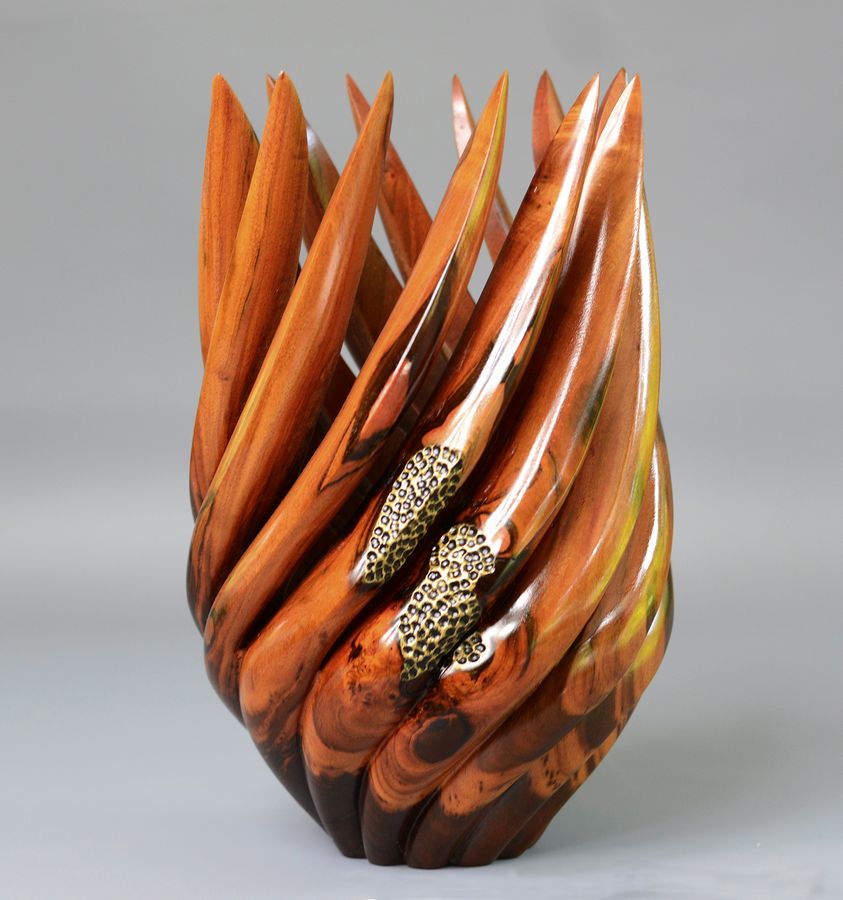 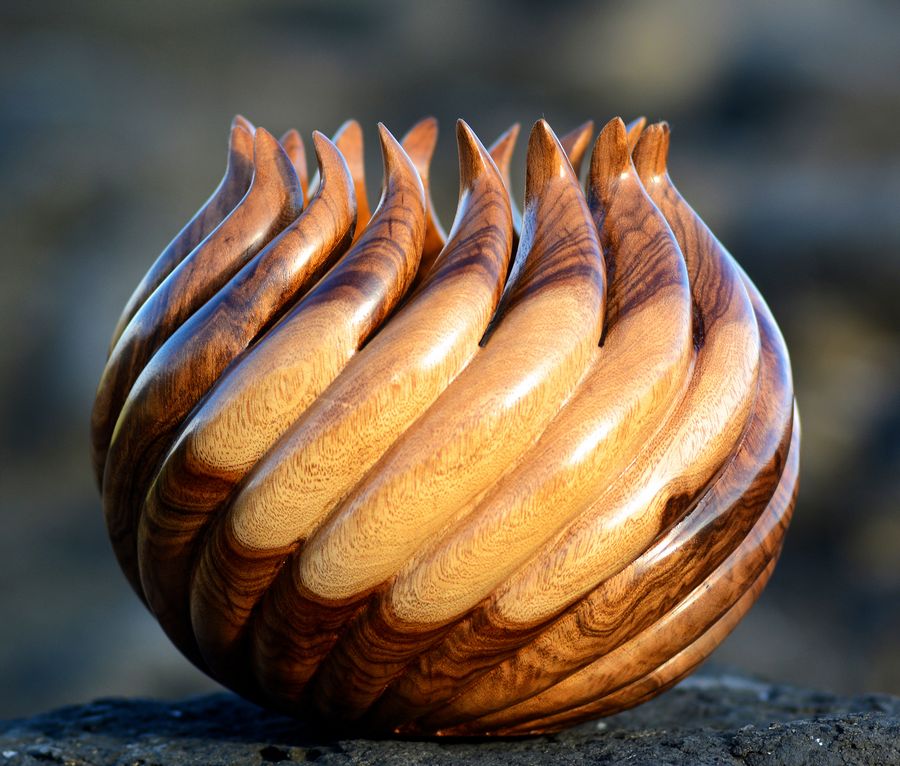 I was interested by spiral work but the examples I could see were a little bit too “regimented.” I didn’t only want to do a spiral piece, I wanted it looks alive, like a plant or a sea anemone.
The second idea was to find a method to do that easily and quickly, I didn’t want to spend a month with hand saw and rasps to do a sad piece as it was described in the classic method.
At this time, around 15 years ago, I discovered in a magazine a fabulous spiral vase made by American turner William Hunter and was encouraged to persist.
In this demo I will explain how to prepare a usable turning for spiral work and will show how to draw spirals, how to cut it and then how to shape it. I also will explain how to turn it into an “alive” piece, like blown by the wind or flowing in the sea.
I will show all the modern tools I use to do that easily. I will also speak about difficulties and how to prevent and avoid them.
Melted Box 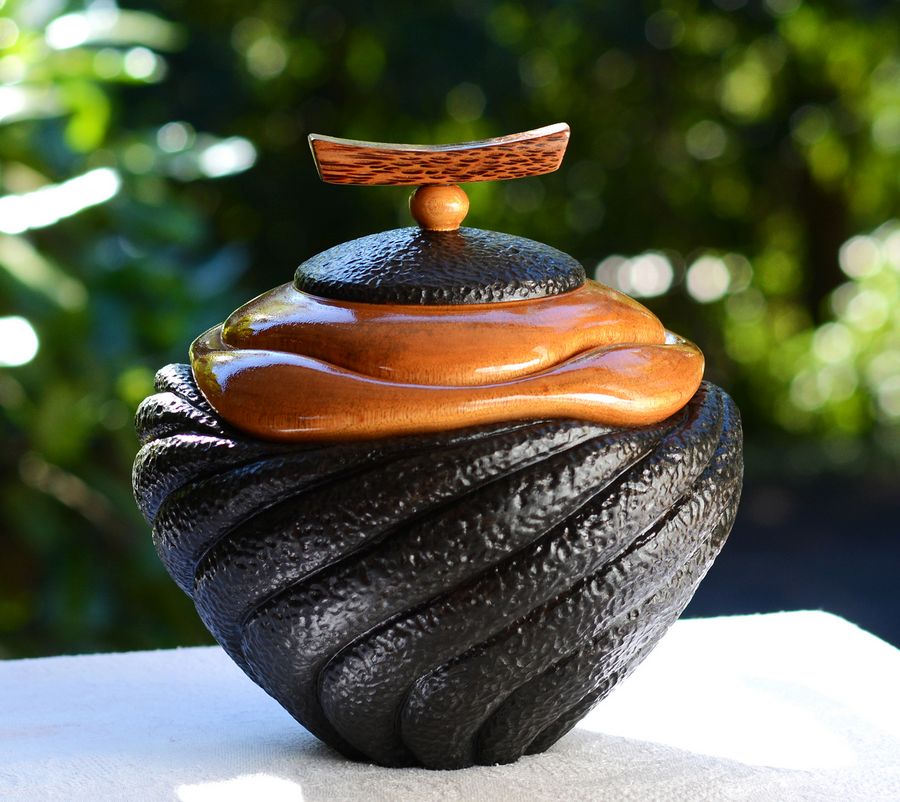 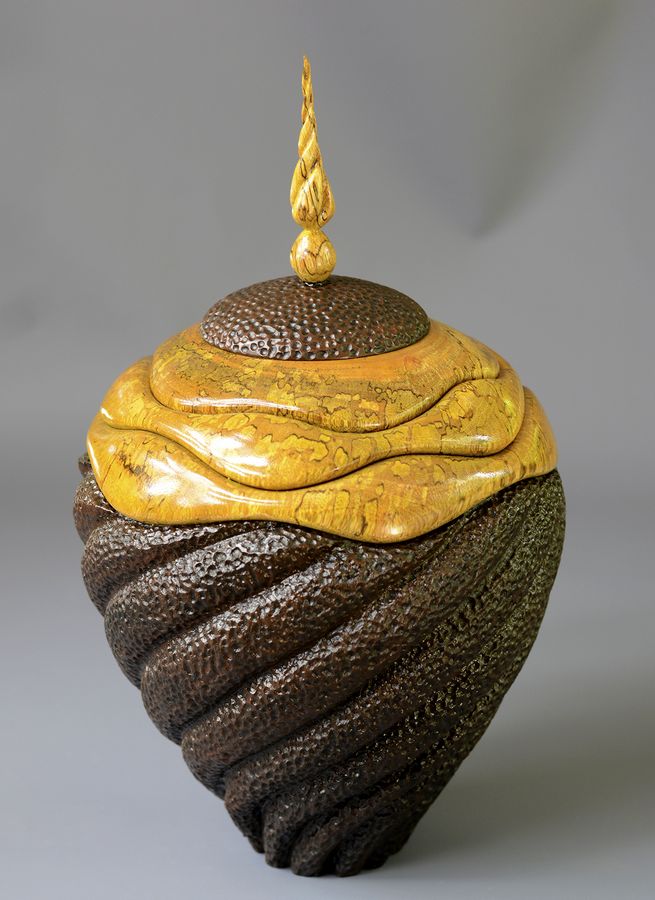 This piece is a mix between wavy and spiral work.
I will apply both methods explained in the first and second demos to get a “melted” box as in my first idea seeing the Japanese pottery.
To make waves agree with spirals requires to pay attention for design to be sure to get a harmonious piece.
I will show tools, drawing, cutting then shaping rings and spirals to get this piece.