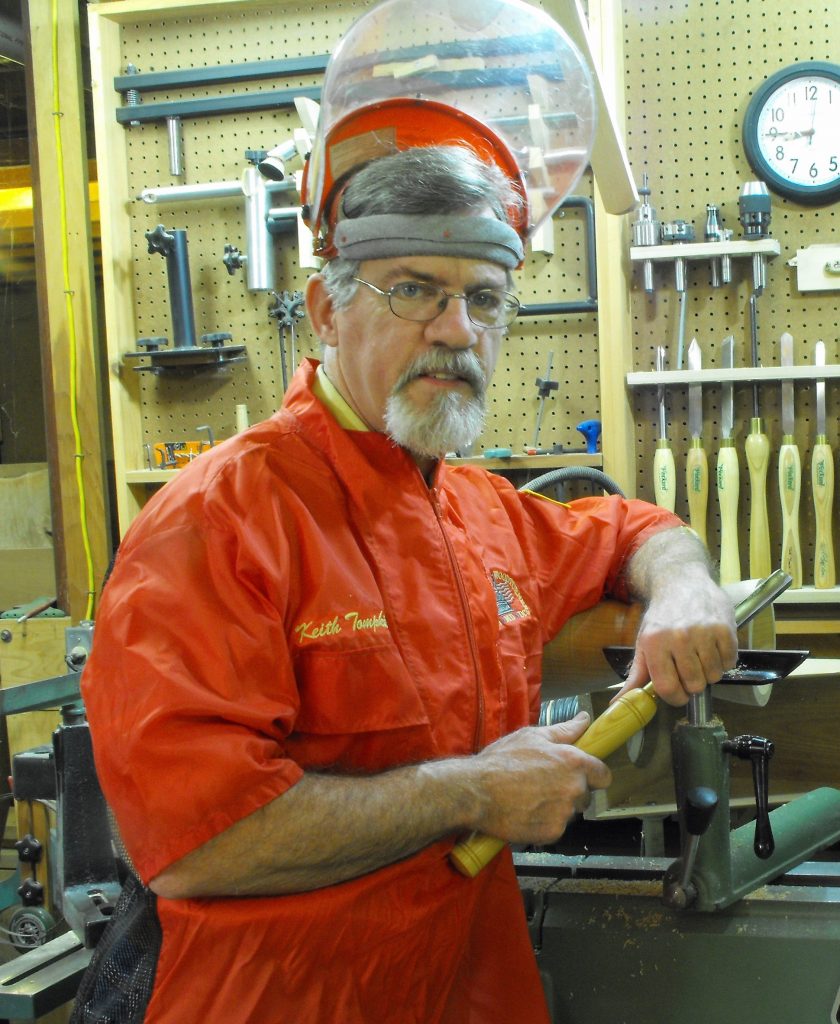 Keith’s introduction to woodworking occurred in the high school wood shop, where he immediately took to the wood lathe. The pieces he produced resulted in his first award, “Craftsman of the Year”, in 1971. Keith began his woodworking career directly after graduating high school, in a production cabinet and chair making shop. Keith received several patents for furniture designs and tooling innovations, including a compound angle gauge used in chair production. Several years and several promotions later, he became the assistant to the company president; helping to create new product lines, and building jigs and fixtures required to put them into production. Before leaving to start his own furniture business, he had been instrumental in growing the shop’s commercial chair production from a handful of chairs a week to 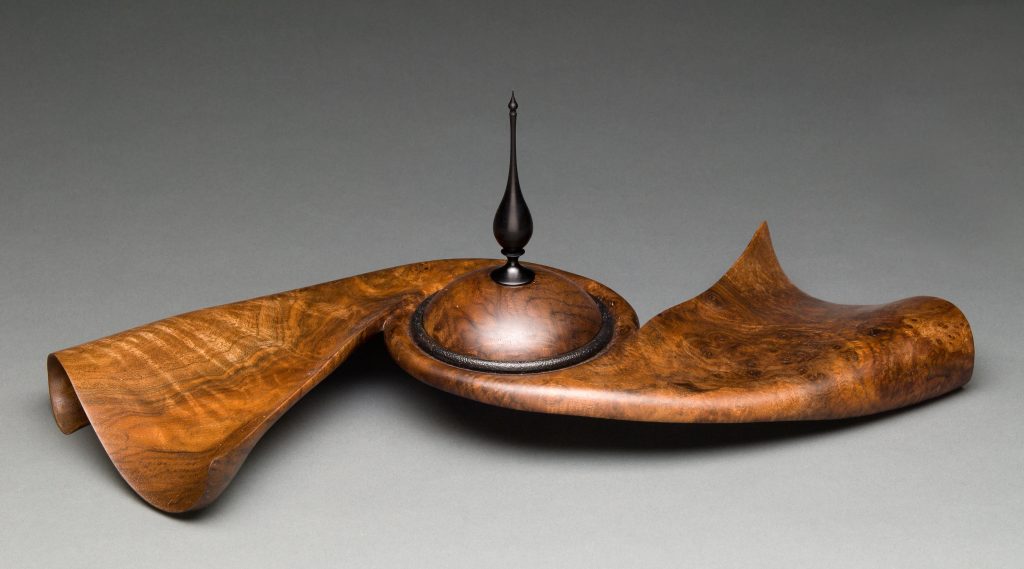 three hundred a day. Eventually, too many years of eighteen-hour days running his own business had taken its toll and resulted in a dramatic career change. It appeared his woodworking career was over, but life can be full of twists and turns. One day in 1987 his wife brought home an auction find, stuffed in the car trunk. It was a lowly Craftsman Monotube lathe, but no matter, it was put to good use! One day, Keith was poring through a wood- art book written by Ray Leier, Jan Peters, and Kevin Wallace of Del Mano Gallery fame. That book was the catalyst he needed; a year later, Keith’s work was being represented by Del Mano. Keith believes his experiences and background in various fields, such as mechanics, and industrial woodworking, and furniture design have helped shape his unique approach to turning. 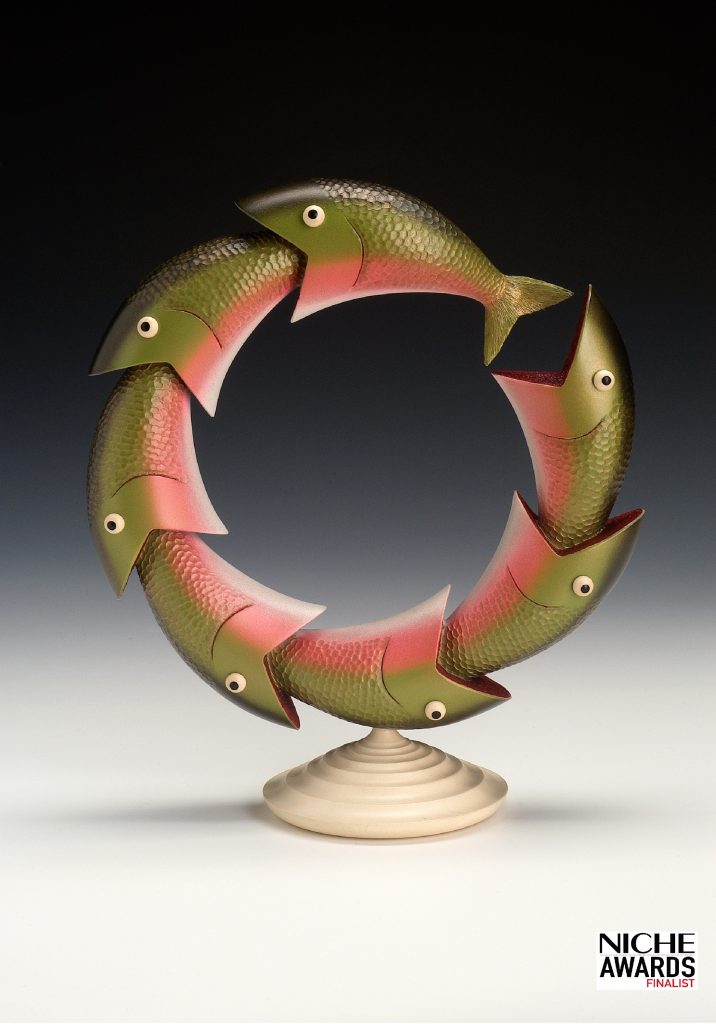 Keith has taught at several craft schools and turning clubs across the United States and Canada and has been selected as a presenter at the American Association of Woodturners National Symposium six times. His work has been published in numerous magazine articles, and in publications such as “Wood Art Today 2”and “500 Wood Bowls”. It was also featured on the rear cover of “Best of Fine Woodworking” and was featured on HGTV’s “That’s Clever” television program. His work has garnered several awards over the years and was selected as a coveted “Niche Award” winner or finalist five times and is included in many prominent collections.

In this demonstration, participants will see how these signature pieces are created, but more importantly, the thought process that is required to produce them. Initially these forms may seem impossible to turn on a lathe, but as the audience will discover, they will require nothing beyond basic woodturning techniques. These forms require deep end-grain hollowing, and Keith will demonstrate the various hollowing techniques he employs. The secret to this technique involves combining multiple turnings that are cut apart and reassembled with great accuracy. This requires the ability to create nearly invisible glue joints. This surprisingly simple process will be demonstrated as well. Creating these serpentine pieces also requires the ability to accurately measure wall thickness; Keith will demonstrate his shop-built thickness gauge, along with the plans that will allow each participant to make their own. In this presentation, Keith will show how one piece can serve as the inspiration for the next; for example, he will turn a rose blossom that appears to be unfurling, using the same techniques he uses to create his spiral forms. The spiral forms created in this presentation will expose those in the audience to seemingly endless opportunities for further exploration.
The Art of the Finial 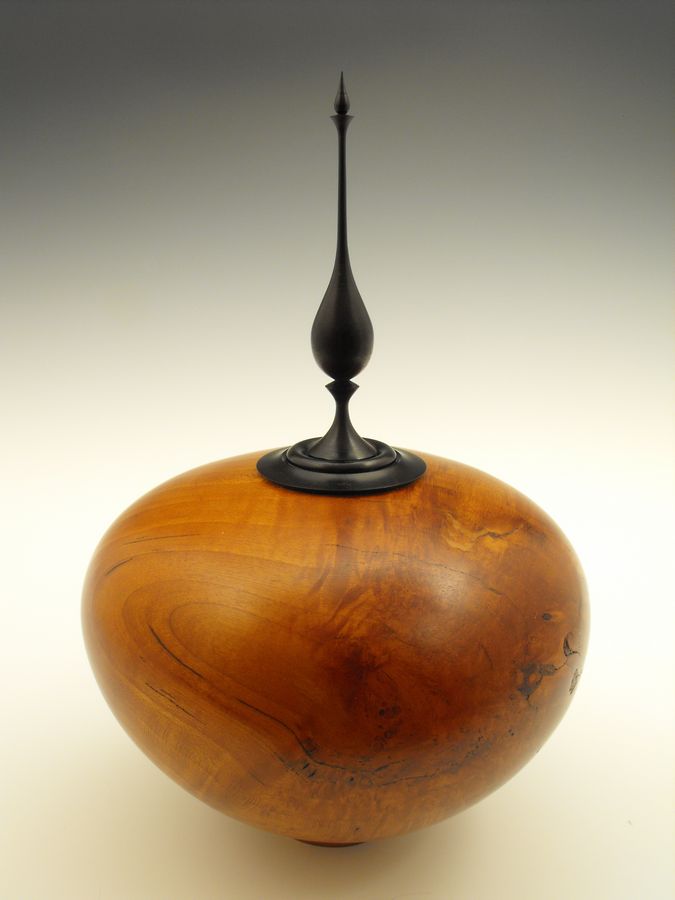 Many turners consider a well-turned finial the epitome of spindle turning; a finial can transform an otherwise ordinary hollow form or turned box into a desirable piece of art. Based upon his years of experience in the furniture business, Keith will demonstrate the tools and techniques required to produce a most attractive finial. Broken down into its basic components, the finial is essentially a combination of beads and coves, separated by sharp, distinct fillets. He will demonstrate methods for turning beads and coves using a spindle gouge and skew chisel that are cut so cleanly that they require little or no sanding. Then, using these essential cuts, he will turn a thin, delicate finial supported by just one end in a chuck. In addition, Keith will place a heavy emphasis on design, focusing on the elements that make up a well-proportioned finial. Those attending this demonstration will discover the importance of smooth flowing curves, and how these elements, when combined carefully, can create a dramatic sense of movement.
Design Inspiration 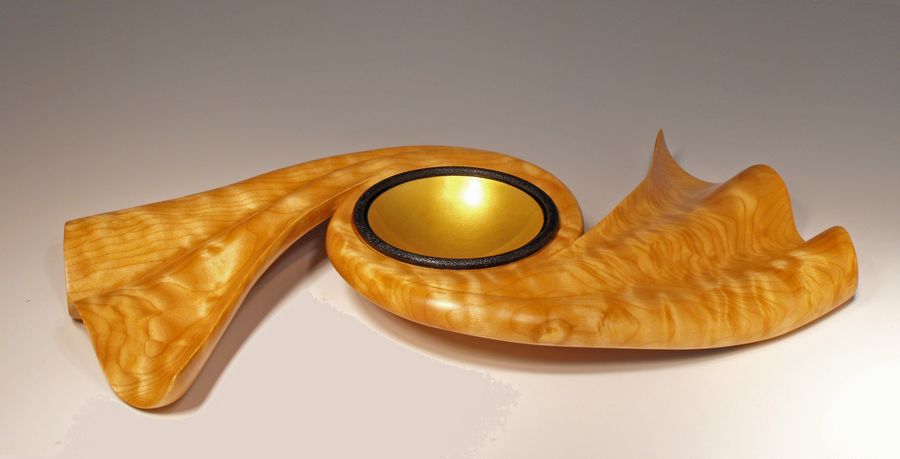 In a rut? How many times have you stood at the lathe and asked yourself “What should I turn next?” Have you ever noticed that a shape you’ve turned just isn’t quite right, but you just couldn’t put your finger on what was wrong? We can fix that! It is Keith’s belief that a turning can be viewed as either “dynamic” or “static”. A dynamic piece can suggest sense of movement, while a static piece appears lifelessly anchored to the surface it sits upon. In this presentation, Keith will demonstrate design concepts that can be applied to one’s work immediately, transforming lifeless shapes into dynamic pieces of art. Can a turning be considered either masculine or feminine? Keith thinks so, and will explain how thinking in these terms can have a huge impact on the work we produce. Concepts such as the “rule of thirds”, and the “golden rectangle”, and the simple catenary will be discussed, along with ways to apply them successfully to your work. Keith will discuss the importance of balancing technical skills with design skills and show why that is an important consideration. Keith will also show how life influences can be reflected in one’s work in order to create “signature” pieces, and to keep the creative juices flowing!